The Role of Practice in Learning: Directed Practice 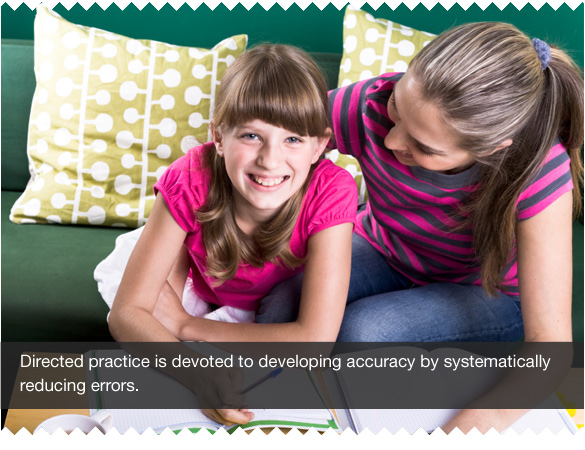 What is Directed Practice?

Directed practice is that part of learning that occurs immediately after instruction. During instruction, the learner is grasping the concept of operation and adding it to their repertoire. Instruction basically ends when the learner can demonstrate the operation or concept for the first time. Such a demonstration however does not provide us with confidence that the student could repeat the performance. In order to consolidate the new learning, practice begins.

There are two different types of practice, directed and independent. Directed practice takes place under the watchful eye of the teacher, classroom aide, tutor, parent or therapist. The purpose of directed practice is to ensure that the student is not learning to make errors as they apply the concept or operation to examples not included in the teaching set.

The Potential Problem with Unsupervised Practice

If a concept is taught in a lesson and the students are then given unsupervised practice, a number of students are likely not only begin to make errors, but also to practice these errors in the assignment. They now have an incorrect understanding of the concept, the operation or the application of one or both components. As a result of not being supervised, they are now practicing errors that corrupt the learning. When the instructor then attempts to move to the next step, the student who has an incorrect understanding of the situation becomes lost and frustrated.

The Benefit of Directed Practice

Directed practice is devoted to developing accuracy by systematically reducing errors. Directed practice is a lot like coaching where more information is provided as needed until the student demonstrates that they can display the skill consistently.

Directed practice can be done with worksheets which show each of the steps in the process completed. The student works with the material provided using only the segments they need until s/he feels ready to attempt the exercise without the prompts. The final step is in having the student complete the assignment without using any part of the answer sheets.