The Role of Practice in Learning: Independent Practice 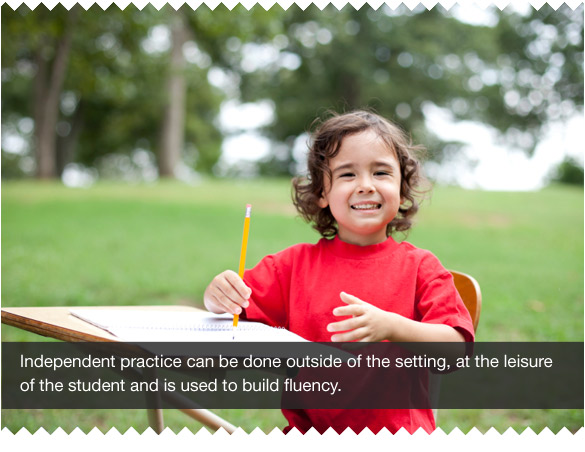 What Is Independent Practice?

Once a student has demonstrated that they can apply their new knowledge to a set of exercises without making more than a couple of mistakes, you can move to independent practice. As the name suggests, independent practice is done without the oversight of a mentor. It can be done outside of the setting, at the leisure of the student and is used to build fluency.

Now that we know that the student can reliably complete the task with almost no errors, we can concentrate our efforts on increasing the pace of performance while holding the quality at a high level.

A beginning reader might be able to read words in a story completely correctly, but they are reading so slowly that they are not going to finish the story any day soon. The usual formula is to work with directed practice with the student until they are half way to the standard of fluency, generally around 100 words read orally per minute. From that point on you can have the student practice independently with the expectation of doubling their score with sufficient rereading.

Some professionals worry that the child merely memorizes the story. While that may be so, the same words are going to recur in different orders in their future reading … and they will be able to recognize them and read them quickly and accurately.

Careful not to Overwhelm Your Students

We must be cautious not to overwhelm students with too large a chunk of learning at any one time. If you want a student to read a list of 100 words that they have been taught at 60-80 words per minute, you might want to split the task into parts.

First we will practice the first column of words until the student makes few errors and can read 30- 40 per minute. Then we will move to the next column, putting the first one on independent practice. We will continue until the student has reached the half way mark to fluent performance and the add the two columns together as an independent practice task.

In this way, we are able to spend our time doing directed practice with less familiar columns of the words while we let the student practice the better known columns independently until s/he can do 60 -80 words per minute with no more than 2 errors per minute.