The Role of Practice in Learning: When is “Good Enough” Good Enough? 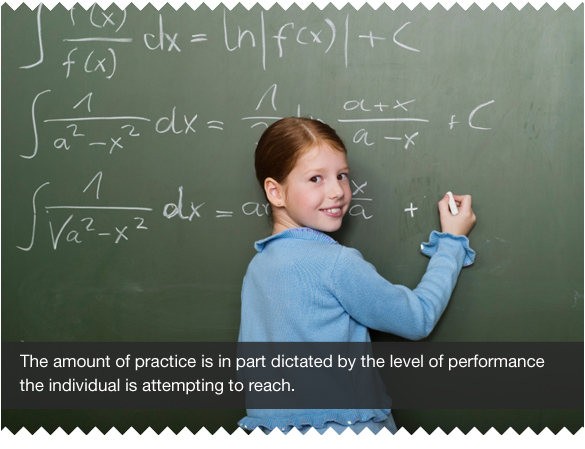 How Do You Know When You’ve Reached Your Objective?

One of the major problems with designing practice routines is to determine when there has been sufficient practice to consider the objective to be achieved. Malcolm Gladwell in his book, “Outliers, notes that the Beatles became one of the most musically competent rock groups because of the thousands of hours they spent playing in the pubs in Germany over a ten year period. He suggests that anyone who becomes a virtuoso practices for a minimum of ten thousand hours before reaching the apex.

So the amount of practice is in part dictated by the level of performance the individual is attempting to reach. An Olympic athlete accepts many, many more hours of various forms of practice in order to become one of the very elite athletes in his or her sport. Most people settle for a much more recreational level of involvement. We are not seeking an Olympic medal of any color. We mostly want to play well enough just to have fun. I may hit a bucket of golf balls on the range every so often. Tiger Woods apparently hits about 1000 balls a day. The difference shows in both of our games.

The amount of practice required is also affected by the relative speed with which each individual learns. For each of us, some learning comes easily and requires relatively little practice. For other tasks, it is an uphill slog. We need thousands of repetitions in order to reach a fluent level of performance.

My golf game will take a couple of lifetimes to reach a point where I could make par. At least with golf, there is a distinct counting system which allows you to compare your performances against a real target; a score of 36 for 9 holes or 72 for 18 holes. And it doesn’t matter whether it is me or Jack Nicklaus who is playing, the standards remain the same.

In other sports, the clock determines the standard and your score compared to the current record for your level and age group gives you an idea of the need for more or less practice.

In academic tasks, it has always been seen to be difficult to determine a standard to reach. This then makes the prescription for the amount of practice murky as well. Fortunately, the work done in Precision Teaching across North America in the last 50 years has helped to establish a large number of standards for academic tasks. These standards are the results of the collection of timed information on specific tasks by many thousands of individual students. They represent fluent levels of performance. The relative improvement over time helps to predict the amount of practice required.