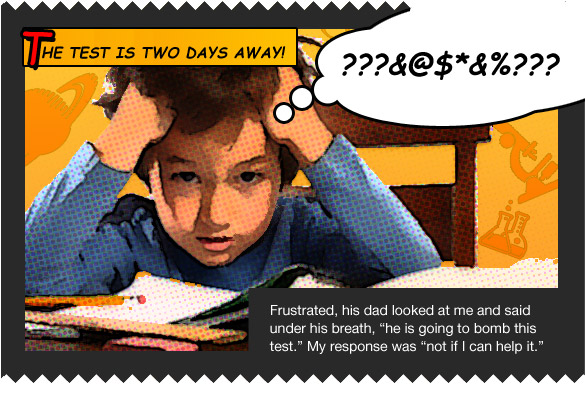 This post is written by a guest blogger Danielle Costa, who is a behavioral educator from Roseburg Oregon who has just started her own learning center.

Jack is 14 and in the 8th grade. Sometimes he struggles to remember material that will be covered on a test. This week was no different. His science teacher had given him a study guide with about 60 questions including vocabulary words. He had been using the study guide all weekend and had spent hours trying to recall the information, facts, and vocabulary. The test was on Monday and by Sunday afternoon, at best, he was guessing at over half the questions and missing most of the answers. Frustrated, his dad looked at me and said under his breath, “he is going to bomb this test.” My response was “not if I can help it.” I had the fortunate opportunity to watch SAFMEDs in action at Morningside Academy in Seattle, and I knew that would be the help my son so desperately needed.

SAFMEDS is based on a system that was created by a well-known behaviorist, Dr. Steve Graf at Youngstown State University, (Ohio) and influenced by Dr. Ogden Lindsley, from the University of Kansas and. They named this system of cards, SAFMEDS, which stands for “Say All Fast, Minute Each Day, Shuffled”.

If you are thinking that this sounds like flash cards, let me stop you. It is not at all like flash cards. SAFMEDS are said daily, the emphasis is on speed and accuracy, whereas, flash cards are usually said at a leisurely pace. The SAFMEDS cards are shuffled before each timing and the results of correct and incorrect answers are charted. SAFMEDS provide students with practice to build fluency quickly.

You can create your own SAFMEDS cards by using index cards and cutting them in half. I found that a smaller card size (e.g. 1 ½” x 3 ½) makes it easier to flip through the cards quickly. In my son’s case, I put the vocabulary word on one side with the definition on the other. We set the timer for 1 minute and he would read the card and give the definition. I made 3 stacks of cards as he would give the answer:

Stack 1: He knew the answer immediately
Stack 2: He hesitated but then got the answer correctly
Stack 3: He didn’t know the answer at all.

I would mark his time and then we would review the one’s he missed. Then we’d shuffle all the stacks of cards and do it again. It was a game to him rather than sluggishly trying to remember dull vocabulary words. The words began to take on significance because the exercise was fast, which caused him to be completely engaged. The task at hand was no longer drudgery but quickly became more about beating his time and getting all the answers correct.

Within 1 hour he knew all the questions and vocabulary words on his study guide. Later that evening after dinner we ran through them again and realized he not only knew the material well, but that he had actually mastered it. He was extremely confident that he would do well. But the proof, however, would be how he actually performed when he took the test.

Two days later he came home from school with his test score from Science. He received an 88%. Two weeks later Jack was sitting at the kitchen table working on homework. His sisters SAFMEDS of letter/sound combinations were nearby. He saw the AU card. “A.U.”, he said. “You know what that stands for, Astronomical Unit. It is the mean distance between the Earth and the Sun.”

SAFMEDS works. I use this method not only with my son, but I use it with all the students that I tutor. Their times continually improve and I always see significant gains.

And of course, if you use the Standard Celeration Chart when recording the SAFMEDS you will have a concrete record of how well your student is performing.