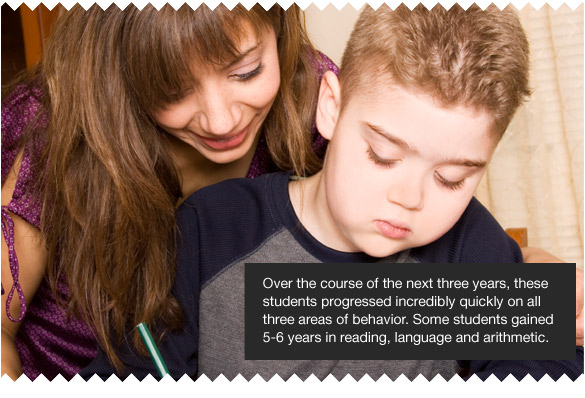 A New Challenge: Setting up an Academic Program for Autistic Students

At the end of November 2008, I began a journey, both literally and figuratively into the world of autism. I was invited by Eva Hyto, founder of the Hong Kong Junior School, to assist her in setting up an academic program for 7 autistic students in Hong Kong. These seven students had been in previous Intensive Behavioral Intervention (IBI) programs at the Autism Recovery Network, a local autism service, for various lengths of time before being admitted to the school. In the beginning, the two agencies shared space in adjacent office suites.

The program was in its infancy and was not registered as a school. The 7 male students varied in ages from 7 to 12, had differing degrees of autism and had at least basic language skills ( Cantonese and or Korean, and English). The school was designed to teach all of the programs in English. The staff were either Hong Kong Chinese university graduates or Philipino teachers working in Hong Kong. Because these parents had disposable income, a physiotherapist and a speech therapist were added to the staff.

The program was structured with three main types of programs, academic, personal hygiene and social learning. The classroom was set up as a series of learning centres; one each for reading, math, language, and spelling. The social program components were done in the classroom or in the playground area and included, music, physiotherapy practice routines, snacks and lunch periods. Hygiene lessons for toileting, hand washing and teeth brushing were built in at the appropriate times.

Initially, the focus was on compliance. For the teachers, this meant getting the students under instructional control. For the students, this meant learning to follow instructions. To accomplish this, a system was carefully developed to get the students into a routine from the moment they entered the classroom until they ended their day.

On day one, all four teachers had to stand behind the students’ chairs while the students ate lunch in order to keep them from stealing each other’s food, hitting or biting other students or refusing to eat. At the end, all of the students were sitting at the table, one student would deliver the lunches to each student with a statement. “Evan, Here is your lunch”, to which Evan answered, “Thank you Thomas”. When the last child was served, the students would begin their lunch without teacher supervision

Each student was awarded stickers which could be turned in for short periods of free activity time. The student had to write the activity he wished to earn on his portable whiteboard before each scheduled class. As soon as he earned his required number of stickers, he could have the reward he sought. The faster and more cooperatively he worked, the sooner he could claim his reward. Academic classes were kept to a maximum of 15 minutes. Social learning classes could last up to a half- hour. Initially data were collected daily for specific behaviors in each academic domain. As the program advanced, data were collected every other day. Tantrums and refusals were also counted and charted.

The Progress: 5-6 Years in Reading, Language and Arithmetic

Over the course of the next three years, these students progressed incredibly quickly on all three areas of behavior. Some students gained 5-6 years in reading, language and arithmetic. At a major autism conference, the students performed a synchronized dance to the song “Kung Fu Fighting” in front of 500 dinner guests at the conference gala. The audience rewarded them with a standing ovation.

As refreshing as all of this is, it led me to an interesting thought. When I came to the HKJS project, I brought the same behaviorally-based programs as I had used with other, non-autistic students. These programs had worked with foster children whether they were taught by the teacher, the second year psychology student or the parent, all of whom we had trained as part of the research we were doing at the time. As bright and as dedicated as my Chinese and Philipino teachers had been, they had not known any of the successful methods when they started, but learned it in order to run the program.

Anyone Can Do What We Did

Today, my local Rotary club has a literacy program at our local YMCA in which we use the same programs to train volunteers, mostly high school students, to teach underprivileged children to read. The results have been consistently good for three years now. The same is true for my thousands of homeschooling parents who use these programs to teach their children. I have also trained tutors for homeschooled children with learning problems and others with autism using these programs and SKYPE.

So if such a diverse group of people can learn to use these effective methods, is it possible that parents or tutors could teach a higher functioning autistic student using the same tools? No Question.

An Option to Consider

Parents of children with ASD often wait months or even years for service. If they are being forced to wait for services for years instead of days, could we at least be doing something helpful for some of the skills their child needs while we wait? It takes a bit of planning, a bit of training, some communication about what the data is telling us and we are in business. Let me know if you are interested.