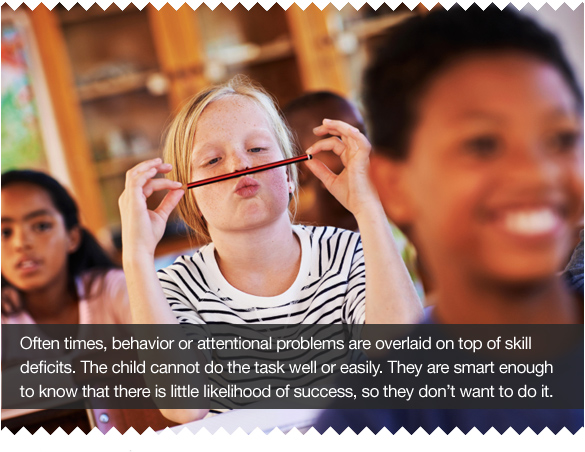 Some children are easy to teach. Others present all kinds of behavioral challenges. Sometimes children are inattentive and do not stay on task for more than a few minutes at a time. Often times, these children disrupt our ability to teach others who are working hard. When this disruption becomes significant and the child is not learning, teachers and parents often turn to doctors, psychometrists or psychologists. Such visits and referrals may result in testing and in a diagnosis of Attention Deficit Disorder or Attention Deficit Hyperactive Disorder. Any such diagnosis represents a serious situation for the learner and his or her family. Such diagnoses tend to take the problem and insert it somewhere into the brain of the child as if it were a neurological issue over which we have little or no control. In numerous instances, the proposed remedy turns out to be of a chemical nature – usually medication, most likely Ritalin.

Are there other options? We would propose several that might be tried before any other steps are taken.

It is clear that the teacher/parent must have instructional control in the learning environment in order to teach effectively. You cannot teach or learn in chaos. Ultimately the situation boils down to the fact that there is something that the student needs to know and that the teacher has the skills to teach, but it will only be successful if the student pays attention. When the student is learning well, there tend to be few behavior or attentional issues. It is when the student is “not getting it” that attention flags and distraction and disruption begins.

Often times, behavior or attentional problems are overlaid on top of skill deficits. The child cannot do the task well or easily. They are smart enough to know that there is little likelihood of success, so they don’t want to do it. They get little satisfaction and much frustration for their efforts and become discouraged, easily distracted or even disruptive.

The very best defense against behavior problems is to make the student successful. That means that the teaching must be effective and the learning must be held to high standards. Perhaps the behavior problem is the result of the fact that some skill that is required for this task needs to be retaught in whole or in part and needs to be much better practiced so that the student can do the task quickly and easily and has no need to be off-task. For example, a child doesn’t like to write stories or do written assignments because his spelling skills are inadequate. Each effort results in much editing and correction and not much satisfaction. If the parent /teacher were to teach spelling more effectively, the task would suddenly be much more manageable and less challenging. Careful attention to the order in which skills are taught makes the teaching much more effective, the likelihood of failure far less and the chances for inappropriate behavior decreased.

Student’s problems can generally be divided into two types, behavior problems or skill problems. Behavior problems occur when the child may or may not be able to do the task, but chooses not to work diligently. Skill problems are those which no amount of effort on the child’s part will change things until someone teaches him the necessary skill(s) to be able to succeed at that task. Skill problems are corrected by better teaching, more practice, and by holding students to high standards of performance on specific easily measured tasks. Behavior problems are resolved by managing the learning environment so that the student wants to attend and is rewarded for work hard. They are quite different processes.

A child cannot be on-task (attentive) and off-task (inattentive) at the same time. Children drift off task when the pace of the lesson is too slow and they become bored or is too fast and they become lost. Pacing the teaching so that the child is forced to pay attention but not pushed into unnecessary errors is one simple way to keep students attentive. Most instruction errs on the side of being too slow. Kick up the presentation pace and see what happens. The student will either attend better or become lost. Finding the appropriate pace takes a little time, but results in big gains.

Children crave attention and will do many things to get it, especially from particular adults, such as their parents. Teachers and parents often underestimate the power of their attention. Children will work hard for such attention. They are generally unhappy when it is withheld. The secret is to give the attention to those behaviors which you want to strengthen and to withhold it from behaviors which are undesirable.

Sometimes parents get trapped by giving attention to the wrong behavior. The child stops working and gazes out into space. Mom asks the child to get back to work. The child does so, but a few minutes later is once again distracted and the cycle begins again. The criticism trap works because the child gets attention, albeit for the wrong behavior, and mom gets reinforced with temporary compliance to her request when she criticizes the child, but over time there is little real change. The problem persists. The inattentive child can become much more attentive if mom carefully attends to which behavior she pays attention to. Don’t wait for bad behavior. Catch them being good. A lot of off task behavior will disappear if attention is consistently given only to the acceptable behavior of paying attention.

Sometimes a points chart which outlines which behaviors will earn rewards can be provided to motivate the child to try harder. The points are kept in a bank book and used for agreed upon articles or activities. Such a points chart could have a list of acceptable behaviors such as paying attention, following instructions and completing assignments as categories which earn points.

Setting a kitchen timer for short periods of attentive work is another option. If the child can generally work for ten minutes, but then begins to drift then the timer could be set initially for ten minutes. As the child earns rewards and learns to work consistently, the setting can be gradually increased until the work pattern resembles the behavior of other less distracted learners. The clock should generally be kept in view so the child can see how much longer he needs to work diligently.

The research literature contains many thousands of studies of behavior management in academic situations. There are many well-written books on the subject. Most interventions are relatively easy to use and have immediate and lasting effects. Like any other technology, behavior management does require skill on the part of the user. These skills are relatively easy to learn as an option to labeling a child and being dependent on medication. It is at least an effective first step to an alternative.