Why School Textbooks are Incomprehensible 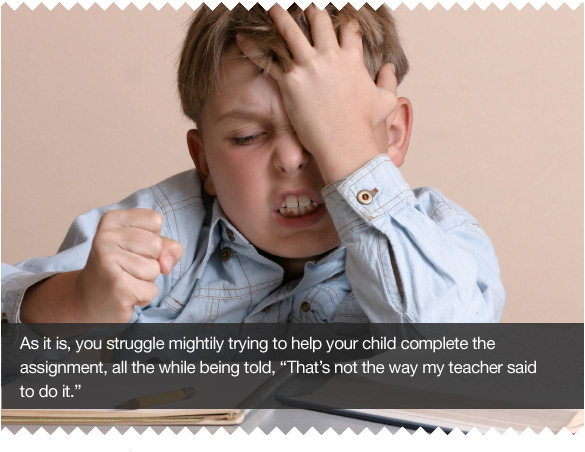 Here you sit at the kitchen table with your 6th grade student trying to do a math assignment. If you are lucky, he has brought home his math textbook. Consider yourself lucky, in one way, because many schools no longer allow kids to bring home textbooks. The dog eats too many of them and textbooks are expensive to replace. Consider yourself unlucky because he brought home his math textbook.

You begin to wonder just how lucky you are as you try to decipher the assignment. There are lots of pictures, graphs and illustrations, but little information all neatly packed into just one page. This is certainly not what you remember from your textbooks where there were pages of problems on any given topic and you could understand the examples and eventually figure out the correct procedure.

As it is, you struggle mightily trying to help your child complete the assignment, all the while being told, “That’s not the way my teacher said to do it.” Finally, you are forced to admit that you have no idea what this assignment is teaching your child or how any of this makes sense and you admit to him that you do not understand what the assignment is supposed to do or how to do it. The best you can do is to refer him back to his teacher for more instruction. Now you feel like a complete ignoramous, and definitely not as smart as the average 5th grader. It hasn’t done much for your relationship with your child either.

Why are our current textbooks so incomprehensible?

To answer this, you may need a short history lesson. That history is summarized in “Textbooks in American Society; Politics, Policy and Pedagogy” by Altbach, P.G.; Kelly, G.P.; Petrie, H.G.; and Weis, L. (Eds.) These authors note that the formation of textbook committees on a state level to decide on the appropriateness of textbooks for schools, while well intentioned, created a huge problem. They list several other contributing factors, but I will deal only with this one as a good example of the problem.

Almost half of American states have textbook committees. In Canada, provincial Departments of Education have their own curriculum must-have lists. Their job was to ensure that any textbook adoption took into consideration all of the objectives for that area of study that were outlined by the state curriculum guidelines. If the proposed textbook failed to include materials on these objectives, the committee would not recommend adopting the textbook.

Such a policy placed educational publishers in a difficult position. Many states had objectives that differed from other state’s lists of objectives. A text that would cover all of the math objectives for 20 or so states would be the size of a New York telephone book, would weigh as much as a marine’s rifle and would be completely unaffordable to most schools.

The textbook publishers are smart people. They knew that states, like California, Texas, Florida, New York, Illinois and Ohio, needed to be covered in order to make a large enough market for any textbook to be profitable. Without these states, there was no possibility of making a profit. So they made sure that the myriad objectives for any particular grade in any particular subject of the larger, somewhat wealthier states were covered. To save space, many of these objectives would be covered in very brief “review exercises”.

Even this meant that there were far more objectives than could be exhaustively treated, so they had to squeeze many more exercises into each text to cover so many. The result is that any one objective is allocated only a very small space.

So there you sit with a mish-mash of information that complies to all of the state stipulations, but that is next to impossible to figure out so that we can help our kids.

The only solution I know of to solve this dilemma is to go find an old fashion pre-textbook committee math book and teach him the skills the way that you learned them. Even if it is ,“Not what my teacher said to do it” , eventually the knowledge and skills will coalesce somewhere in the future. And maybe you will feel a little better knowing that at least your child has one way to solve that math problem, even if it doesn’t align with the state or provincial standards.